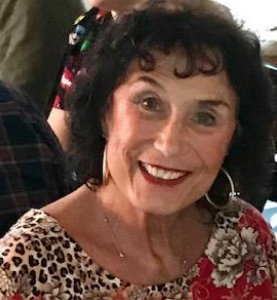 I hope you are staying well and in the shalom of God.

Life has certainly changed during this worldwide pandemic, and many of the things that we have taken for granted and relied on have come to a halt.

But God’s Word has not changed, and we can ALWAYS rely on Him to uphold His Word. His Word is an anchor to our soul. When circumstances, trials and tribulations attempt to bring swirling winds of anxiety, we can stay in perfect peace when God’s Word is kept in the forefront of our minds and on our lips.

God has given His people many promises in His Word. And GOD KEEPS HIS PROMISES.

Even when life throws a huge curve ball making it look impossible for His promises to be fulfilled, HE IS FAITHFUL.

But He does require us to remain faithful and trust Him to perform His Word.

For instance, Abraham was given specific promises, and although in the natural, they looked impossible at times, God proved Himself faithful. And He will do it again and again.

“When Abram was ninety-nine years old, the Lord appeared to him and said, “I am God Almighty; walk before me faithfully and be blameless. Then I will make my covenant between me and you and will greatly increase your numbers.”

“Abram fell facedown, and God said to him, “As for me, this is my covenant with you: You will be the father of many nations. No longer will you be called Abram; your name will be Abraham, for I have made you a father of many nations.  I will make you very fruitful; I will make nations of you, and kings will come from you.  I will establish my covenant as an everlasting covenant between me and you and your descendants after you for the generations to come, to be your God and the God of your descendants after you. The whole land of Canaan, where you now reside as a foreigner, I will give as an everlasting possession to you and your descendants after you; and I will be their God.”

What promise are you waiting for God to fulfill in your life? Be patient, faithful and steadfast, and He will bring it to pass.

Help me to trust You and remain faithful to You no matter what. Give me the revelation in Your Word that will build an anchor in my soul to keep me stable in times of trouble.

Before you leave, please take a look at my inspirational sculpture of Abraham, Isaac & the Ram on this page!

If you’ve ever wondered whether or not God tests people, then just read the story of Abraham.

Abraham proved his faith in God when he obeyed Him by taking Isaac, his only son, up on Mount Moriah to offer him up to God. Abraham KNEW God and HIS WAYS and HIS CHARACTER and TRUSTED HIM. That was why he was able to obey God on Mount Moriah.

Take special notice of verse 5: He said to his servants, “Stay here with the donkey while I and the boy go over there. We will worship and then we will come back to you.”

7 Isaac spoke up and said to his father Abraham, “Father?”

“The fire and wood are here,” Isaac said, “but where is the lamb for the burnt offering?”

8 Abraham answered, “God himself will provide the lamb for the burnt offering, my son.” And the two of them went on together.

1 Some time later God tested Abraham. He said to him, “Abraham!”

2 Then God said, “Take your son, your only son, whom you love—Isaac—and go to the region of Moriah. Sacrifice him there as a burnt offering on a mountain I will show you.”

3 Early the next morning Abraham got up and loaded his donkey. He took with him two of his servants and his son Isaac. When he had cut enough wood for the burnt offering, he set out for the place God had told him about. 4 On the third day Abraham looked up and saw the place in the distance. 5 He said to his servants, “Stay here with the donkey while I and the boy go over there. We will worship and then we will come back to you.”

6 Abraham took the wood for the burnt offering and placed it on his son Isaac, and he himself carried the fire and the knife. As the two of them went on together, 7 Isaac spoke up and said to his father Abraham, “Father?”

“The fire and wood are here,” Isaac said, “but where is the lamb for the burnt offering?”

8 Abraham answered, “God himself will provide the lamb for the burnt offering, my son.” And the two of them went on together.

9 When they reached the place God had told him about, Abraham built an altar there and arranged the wood on it. He bound his son Isaac and laid him on the altar, on top of the wood. 10 Then he reached out his hand and took the knife to slay his son. 11 But the angel of the Lord called out to him from heaven, “Abraham! Abraham!”

12 “Do not lay a hand on the boy,” he said. “Do not do anything to him. Now I know that you fear God, because you have not withheld from me your son, your only son.”

13 Abraham looked up and there in a thicket he saw a ram caught by its horns. He went over and took the ram and sacrificed it as a burnt offering instead of his son. 14 So Abraham called that place The Lord Will Provide. And to this day it is said, “On the mountain of the Lord it will be provided.”

15 The angel of the Lord called to Abraham from heaven a second time 16 and said, “I swear by myself, declares the Lord, that because you have done this and have not withheld your son, your only son, 17 I will surely bless you and make your descendants as numerous as the stars in the sky and as the sand on the seashore. Your descendants will take possession of the cities of their enemies, 18 and through your offspring all nations on earth will be blessed, because you have obeyed me.”

No doubt about it, God TESTED Abraham. And Abraham believed God would come through for him in whatever way God chose to do that.

Did he believe God would raise Isaac from the dead?

Was he believing that God would stop him before he lowered the knife?

Was he expecting the ram to be on the mountain?

We don’t know exactly what Abraham was thinking as “he reached out his hand and took the knife to slay his son.” But we do know he trusted God’s love for him completely and he knew God’s plan was ultimately good.

I pray we will trust and obey God, whatever He asked of us. But it’s hard to trust someone you don’t know. We need to KNOW HIM and HIS WAYS, HIS CHARACTER and HIS NATURE. The more we know Him, the more we will be able to trust Him. There is no one like Him! Don’t compare Him to anyone. He is 100% trustworthy, 100% of the time.

O LORD, You are my God; I will exalt You, I will give thanks to Your name; For You have worked wonders, Plans formed long ago, with perfect faithfulness.

The works of His hands are truth and justice; All His precepts are sure.

As for God, His way is blameless; The word of the LORD is tried; He is a shield to all who take refuge in Him.

Before you leave, take a look at my Abraham, Isaac & the Ram sculptures on this page!

Have you ever felt in your heart or had a thought in your mind that the Lord wanted you to do or say something, but instead of doing it, you backed out and didn’t follow through? Perhaps you didn’t want to put yourself in a situation where you might feel uncomfortable or possibly look foolish?

I think a lot of us have experienced that.

Did you have regret later and wish you’d just followed through on the unction?

Well, hopefully you didn’t end up wrapped in a bunch of seaweed and whale slime like Jonah!

I love the story of Jonah in the Bible. It gives a clear picture of the importance of obeying God and how it’s to our benefit to simply say, “Yes, Lord” as soon as He speaks because one never knows what lengths He will go to in order to get our attention if we run away from Him or turn a deaf ear.

I hope you enjoy the cartoon I drew depicting Jonah’s surrender to the Lord… finally. 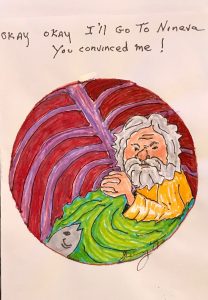 Click HERE to see some more Biblical cartoons that I drew!

But before you say goodbye, take a look at my Jonah and the Whale Sculpture by clicking on this page! 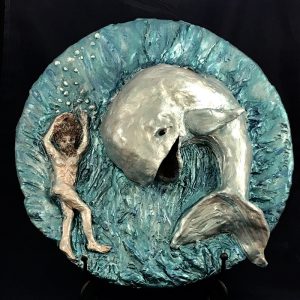 I am so inspired by the Bible story of Abraham offering up Isaac to the Lord in the Book of Genesis chapter 22.

In this story, Abraham shows his total obedience to God AND complete trust in Him. Abraham understood that God is faithful and that He always has our BEST in mind.

No matter what God asks of us, we can ALWAYS know that He loves us and HIS plan is for our good.

You’ll see several of my Abraham sculptures depicting this story by clicking on this page. 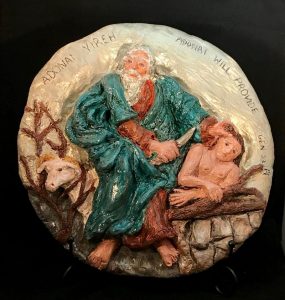